We are an intensely fun, program heavy ship with a focus on big boat and small boat sailing and seamanship. We certainly don't sit and talk... we go and do! During the sailing season we are out on the water as much as possible either big boat sailing down the Chesapeake Bay, small boat sailing in a local lake or river, or taking our speedboat out for a day of fun water skiing or water tubing. During the winter months we take the time to really learn and develop our sailing skills as well as diving into our boats to really learn what it takes to operate and maintain a boat. We aim to form young men and women into well rounded sailors. Founded on 15 May 2000, we have seen a large number of young men and women step on our decks. These men and women have grown a love for the water and sailing and many of whom have gone on to wonderful careers in the maritime industry as well as the Navy and Coast Guard.

Sea Scout Ship 25 has sailed the entire East Coast from Cape Hatteras to Nova Scotia as well as the Florida Keys and and far east as Bermuda. Our ship has been honored year over year with the Northeast Region Sea Scout Fleet Commodore's Award of Excellence as well as numerous Regatta awards over the years. We have even had a few of our Scouts compete in the International Sea Scout Koch Cup Regatta. Sea Scout Ship 25 is committed to the ideal of doing something bigger than ourselves. In that, our ship has contributed countless hours of service to both our community and Scouting at large.

We are Chartered by the Yorkshire United Methodist Church alongside Pack 25 and Troop 25 creating the Yorkshire Family of Scouting.
We are sponsored and supported by Garrod Hydraulics, Friends of Sea Scouts of Maryland (FOSSOM), and the Maryland Yacht Club.
​We are a member ship of the New Birth of Freedom Council, the Sea Scouts Territory 13, and the National Sea Scout Fleet of the Boy Scouts of America. 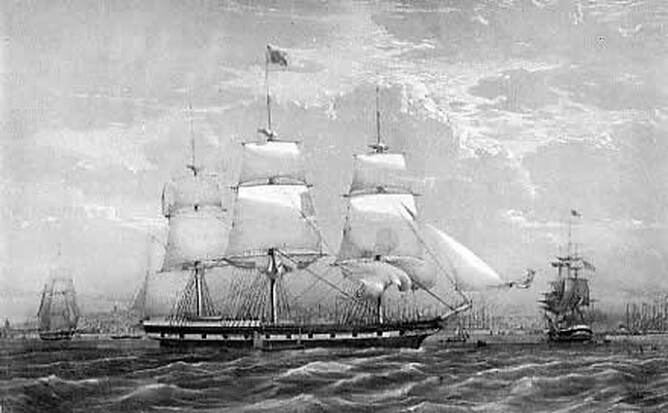 Although our Sea Scout Ship 25 - SSS YORKSHIRE is named primarily for our sponsor, Yorkshire United Methodist Church, the name YORKSHIRE also has ancient and honorable nautical lineage to which we hail from; the celebrated U.S. Clipper Ship YORKSHIRE.

The YORKSHIRE was the second ship Webb built for Charles H. Marshall & Co's Black Ball Line of sailing packets between New York and Liverpool, and the fastest sailing packet that ever served on the North Atlantic. Packet Ships were medium-sized boats designed for domestic mail, passenger, and freight transportation in European countries and in North American rivers and canals, some of them steam driven. They were used extensively during the 18th and 19th centuries and featured regularly scheduled service.

During her 18-year packet career her westbound passages averaged 29 days, her shortest passage being an incredible 15 1/2 days (sailed from Liverpool 2 November 1846, 7 days to the banks, arrived at Sandy Hook, night of 17 November, and at New York, noon 18 November), her longest 58 days. Her early reputation for speed was probably enhanced by the reputation of her first master, David G. Bailey, of whom the New York Herald wrote on the eve of the YORKSHIRE's maiden voyage... "It is a common remark among the sharks when Captain B. goes to sea, that 'it is useless to attempt to follow that ship, for Bailey is on board of her.' Such is his reputation for speed even among the inhabitants of the deep."

On 2 February 1862, the YORKSHIRE, under the command of Edward R. Fairbanks, sailed from New York for Liverpool, with three passengers and a crew of 23; she was never heard from again. It was stated at the time that "probably no ship in the Liverpool trade has realized a larger amount of earnings".

​She is a ship worth remembering, and we do so by taking up her name of YORKSHIRE.
LAST UPDATE 2022-02 | SEA SCOUT SHIP 25 - SSS YORKSHIRE | YORK PENNSYLVANIA